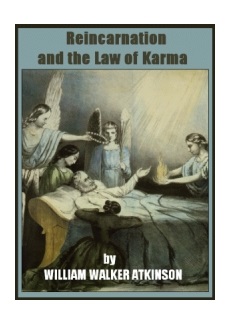 This 148-page ebook is the study of rebirth, and spiritual cause and effect. By “Reincarnation” we mean the repeated incarnation, or embodiment in flesh, of the soul or immaterial part of man’s nature.

There are many forms of belief—many degrees of doctrine—regarding Reincarnation, but there is a fundamental and basic principle underlying all of the various shades of opinion, and divisions of the schools. This fundamental belief may be expressed as the doctrine that there is in man an immaterial Something (called the soul, spirit, inner self, or many other names) which does not perish at the death or disintegration of the body, but which persists as an entity, and after a shorter or longer interval of rest reincarnates, or is re-born, into a new body—that of an unborn infant—from whence it proceeds to live a new life in the body, more or less unconscious of its past existences, but containing within itself the “essence” or results of its past lives, which experiences go to make up its new “character,” or “personality.”

It is usually held that the rebirth is governed by the law of attraction, and which law operates in accordance with strict justice, in the direction of attracting the reincarnating soul to a body, and conditions, in accordance with the tendencies of the past life, the parents also attracting to them a soul bound to them by some ties in the past, the law being universal, uniform, and equitable to all concerned in the matter.

CHAPTER I. THE EARLY RACES
What is Reincarnation?—Transmigration of Souls—The Something That Persists After Death—The Soul Not a Fresh Creation, but a Traveler on a Long Journey.

CHAPTER III. THE ROMANS AND GREEKS
The Reasons of Rome’s Backwardness in Spiritual Knowledge—Why the Greeks were Advanced—Pythagoras; Orpheus; Plato—The Various Grecian Teachings Regarding the Soul and Its Future Life—Plato’s Wonderful Teachings and Philosophy.

CHAPTER V. THE HINDUS
India the Mother of Reincarnation, Past and Present—The Aryan Teachings—The History of the Belief Among the Hindus—Fundamental Hindu Philosophy.

CHAPTER VI. THE MODERN WEST
Reincarnation in the Modern Western World—The Revival of Interest and Its Cause—Theosophical Society—Madame Blavatsky—The Western School of Yogi Philosophy: Its Fundamental Teachings—The Spiritists, and Their Doctrine—The Teachings of the “Elect Few” in Their Secret Societies—Is Earth a Hell?—Christian Reincarnationists and Their Beliefs.

CHAPTER VII. BETWEEN AND BEYOND INCARNATIONS
How Long Between Incarnations?—Necessity for Mental and Spiritual Digestion and Assimilation—The Advanced Teachings—Earth-bound Souls—Advanced Souls and Their Rest Period—Where Does the Soul Dwell Between Incarnations?—What Happens at Death—The Great Astral World and Its Planes and Sub-planes—Where the Soul Goes After Death and What It Does There—Rebirth and Its Laws—What is the Final State of the Soul?—The Message of the Illumined.

CHAPTER VIII. THE JUSTICE OF REINCARNATION
The Contrasting Theories of the Soul and Its Future Life—Doctrine of Reincarnation the Only Philosophical Theory that Reconciles Facts with Theory—The Law of Karma Automatic and Enforces Itself—Every One Their Own Judge and the Executor of Their Own Destiny—The Opinions of the World’s Great Thinkers.

CHAPTER IX. THE ARGUMENT FOR REINCARNATION
Natural Laws Universal—If the Soul is Immortal, it Must Have Always Been So—A Mortal Thing Cannot be Made Immortal Any More Than Nothing Can be Made Something—Future Life Implies Past Life—Varient Experiences
Necessary for the Soul’s Education—Advancement Necessary to Enjoyment of the Soul’s Higher States of Being—The True Teaching.

CHAPTER X. THE PROOFS OF REINCARNATION
Actual Proofs of Personal Conscious Experience Demanded by Science—Such Proofs Possible and Have Occurred to Many of the Race—The Remembrance of the Details of Past Existence Common to the Race—Interesting Cases Given on Good Authority—Messages from the Past.

CHAPTER XI. ARGUMENTS AGAINST REINCARNATION
Why Reincarnation is Opposed by Some—The Answers to the Objections—The Proof of the Existence of the Soul—Is Reincarnation Un-Christian and Derived from Pagan and Heathen Sources?

CHAPTER XII. THE LAW OF KARMA
What Karma Means—Does Karma Punish or is it but the Workings of a Natural Law?—The Various Kinds of Karma—The Advanced Mystical Doctrine—The End is Absolute Good—There is No Devil but Fear and Unfaith.