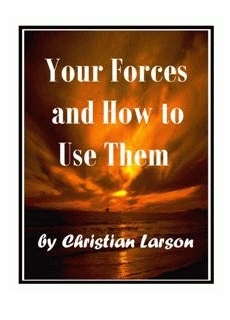 This 149-page ebook purpose is to analyze the whole nature of man, find all the forces in his possession, whether they be apparent or hidden, active or dormant, and to present methods through which all those forces can be applied in making the life of each individual richer, greater and better.

“There are a million energies in man. What may we not become when we learn to use them all.” — This is the declaration of the poet; and though poetry is usually inspired by transcendental visions, and therefore more or less impressed with apparent exaggerations, nevertheless there is in this poetic expression far more actual, practical truth than we may at first believe.

How many energies there are in man, no one knows; but there are so many that even the keenest observers of human activity have found it impossible to count them all. And as most of these energies are remarkable, to say the least, and some of them so remarkable as to appear both limitless in power and numberless in possibilities, we may well wonder what man will become when he learns to use them all.

When we look upon human nature in general we may fail to see much improvement in power and worth as compared with what we believe the race has been in the past; and therefore we conclude that humanity will continue to remain about the same upon this planet until the end of time. But when we investigate the lives of such individuals as have recently tried to apply more intelligently the greater powers within them, we come to a different conclusion. We then discover that there is evidence in thousands of human lives of a new and superior race of people—a race that will apply a much larger measure of the wonders and possibilities that exist within them.

It is only a few years, not more than a quarter of a century, since modern psychology began to proclaim the new science of human thought and action, so that we have had but a short time to demonstrate what a more intelligent application of our energies and forces can accomplish. But already the evidence is coming in from all sources, revealing results that frequently border upon the extraordinary. Man can do far more with himself and his life than he has been doing in the past; he can call into action, and successfully apply, far more ability, energy and worth than his forefathers ever dreamed of. So much has been proven during this brief introductory period of the new age. Then what greater things may we not reasonably expect when we have had fifty or a hundred years more in which to develop and apply those larger possibilities which we now know to be inherent in us all.

It is the purpose of the following pages, not only to discuss these greater powers and possibilities in man, but also to present practical methods through which they may be applied. We have been aware of the fact for centuries that there is more in man than what appears on the surface, but it is only in recent years that a systematic effort has been made to understand the nature and practical use of this “more,” as well as to work out better methods for the thorough and effective application of those things on the surface which we have always employed. In dealing with a subject that is so large and so new, however, it is necessary to make many statements that may, at first sight, appear to be unfounded, or at least exaggerations. But if the reader will thoroughly investigate the basis of such statements as he goes along, he will not only find that there are no unfounded statements or exaggerations in the book, but will wish that every strong statement made had been made many times as strong.

When we go beneath the surface of human life and learn what greater things are hidden beneath the ordinary layers of mental substance and vital energy, we find man to be so wonderfully made that language is wholly inadequate to describe even a fraction of his larger and richer life. We may try to give expression to our thoughts, at such times, by employing the strongest statements and the most forceful adjectives that we can think of; but even these prove little better than nothing; so therefore we may conclude that no statement that attempts to describe the “more” in man can possibly be too strong. Even the strongest fails to say one thousandth of what we would say should we speak the whole truth. We shall all admit this, and accordingly shall find it advisable not to pass judgment upon strong statements but to learn to understand and apply those greater powers within ourselves that are infinitely stronger than the strongest statement that could possibly be made.

Those minds who may believe that the human race is to continue weak and imperfect as usual, should consider what remarkable steps in advance have recently been taken in nearly all fields of human activity. And then they should remember that the greater powers in man, as well as a scientific study of the use of his lesser powers, have been almost wholly neglected. The question then that will naturally arise is, what man might make of himself if he would apply the same painstaking science to his own development and advancement as he now applies in other fields. If he did, would we not, in another generation or two, witness unmistakable evidence of the coming of a new and superior race, and would not strong men and women become far more numerous than ever before in the history of the world?

Each individual will want to answer these questions according to his own point of view, but whatever his answer may be, we all must agree that man can be, become and achieve far more than even the most sanguine indications of the present may predict. And it is the purpose of the following pages to encourage as many as possible to study and apply these greater powers within them so that they may not only become greater and richer and more worthy as individuals, but may also become the forerunners of that higher and more wonderful race of which we all have so fondly dreamed.

Chapter I. The Ruling Principle In Man

Chapter II. How We Govern the Forces We Possess

Chapter III. The Use of Mind In Practical Action

Chapter IV. The Forces of the Subconscious

Chapter VII. How Man Becomes What He Thinks

Chapter VIII. The Art of Changing For the Better

Chapter IX. He Can Who Thinks He Can

Chapter X. How We Secure What We Persistently Desire

Chapter XI. Concentration and the Power Back of Suggestion

Chapter XII. The Development of the Will

Chapter XIII. The Building of a Great Mind