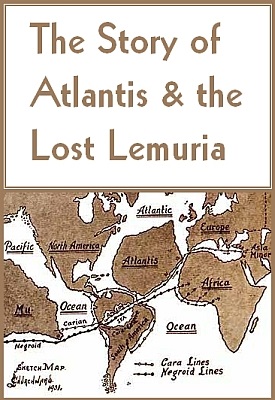 This 107-page ebook discusses in-depth both Atlantis and Lemuria. The destruction of Atlantis was accomplished by a series of catastrophes varying in character from great cataclysms in which whole territories and populations perished, to comparatively unimportant landslips such as occur on our own coasts today.

The greatest authority on the subject of Atlantis is Plato. In the Timæus he refers to the island continent, while the Critias or Atlanticus is nothing less than a detailed account of the history, arts, manners and customs of the people.

It was the Toltec race who developed the highest civilization and organized the most powerful empire of any of the Atlantean peoples. It must be remembered that humanity was still for the most part possessed of psychic attributes, and by this time the most advanced had undergone the necessary training in the occult schools, and had attained various stages of initiations — some even reaching to Adeptship. This was the golden age of the Toltec race. The government was just and beneficent; the arts and sciences were cultivated—indeed the workers in these fields, guided as they were by occult knowledge, achieved tremendous results; religious belief and ritual was still comparatively pure — in fact the civilization of Atlantis had by this time reached its height.

This ebook will also discuss The Lost Lemuria. Although the lost continent of Atlantis has so far received scant recognition from the world of science, the general concensus of opinion has for long pointed to the existence, at some prehistoric time, of a vast southern continent to which the name of Lemuria has been assigned.