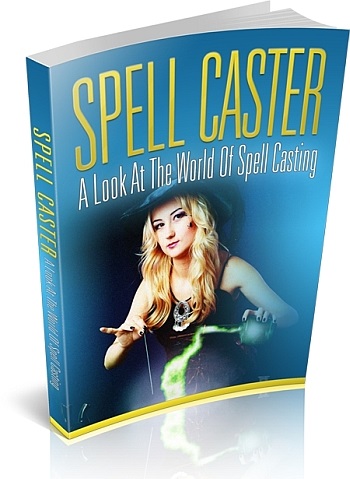 A look at the world of Spell Casting … Spells are a bit like recipes. You may attempt to follow along, however if you aren’t acquainted with the ingredients, if you don’t comprehend the techniques, if you don’t have a general understanding of the techniques or practice very much, it will be haphazard. As a matter of fact, the more you rely on the recipe, without truly learning what makes them work, the more misses you’ll get than hits.

Witchcraft, like any other skills, calls for more than simply following “recipes” — or in this case, spells that others write down. It’s not enough to simply trust it, follow instructions and trust for the best. It demands that you learn, it requires that you become acquainted with the ingredients (components), the tools, the strategies.

This 42-page ebook will supply you with some information and give you an overview of the kinds of matters involved. Practicing casting spells is only enhanced by likewise studying theory. As mentioned previously, putting the correct ingredients together provides you haphazard results. Understanding what you’re doing, and why you’re doing it, step-ups your success rate. It helps you comprehend what you’re doing on a lot of levels. It’s simpler to spot those spells that will work, and those that don’t; it’s simpler to design your own for your particular purposes. It’s simpler to work with your own tools and components.

There are many philosophies when it concerns magic and how it works, which is likewise why it pays to read explanations, theory, philosophies. The most crucial tool for Witchcraft isn’t the cauldron, nor the candle, nor is it even the spell book. It’s the brain. The stronger you are able to make your brain, the better a Witch you will be. It’s crucial to learn how to:

There are psychic exercises to help you improve your mental abilities. A lot of exercises teach you how to utilize all your senses, as well as your extra-senses. They likewise teach you how to sense and gain command over energy. There are a lot of different focal points, a lot of meditative strategies, and for those who don’t like to sit still there’s even moving meditations. If you are going to practice casting spells, you ought to consider at least giving meditation a try.

Spells historically has been the utilization of supernatural powers by redirecting energy. A lot of individuals don’t comprehend the religious belief behind the spells cast by covens throughout centuries. A lot of individuals associate spells and casting spells with wickedness and black magic when that is not what truly goes on. A lot of wiccans and pagan solely practice white magic which is respectful of everybody and brings no harm on anybody or anything.

The execution of magic almost always requires the utilization of language. Whether spoken aloud or unspoken, words are oftentimes utilized to access or guide magic power. The association between language and magic is due to a belief in the innate power of words to influence the universe.

The language of magic is sacred, set and utilized for a totally different purpose to that of average life. The two forms of language are distinguished through word choice, grammar, style, or by the utilization of particular phrases or forms: prayers, spells, songs, blessings, or chants, for instance. Sacred modes of language frequently use archaic words and forms in an effort to invoke the purity or “truth” of a religious or a cultural “golden age”.

A different likely source of the power of words is their secrecy and exclusivity. A great deal of sacred language is separated enough from common language that it’s inexplicable to the majority of the population and it may only be utilized and translated by specialized practicians (magicians, priests, shamans, even mullahs). Magic languages breach the basic function of language: communication. Yet adherents of magic are yet able to utilize and to value the magic function of words by trusting in the built-in power of the words themselves and in the meaning that they have to supply for those who do comprehend them.

An incantation or enchantment is a charm or spell produced using words. An incantation might take place during a ritual, either a hymn or prayer, and might invoke or praise a deity. In magic, occultism, and witchcraft it’s utilized with the intention of casting a spell on an object or an individual and might employ the utilization of pharmakeia. The term derives from Latin “incantare” (tr.), meaning “to chant (a magic spell) upon,” from in- “into, upon” and cantare “to sing”.

Spell casting works in a like way as “positive thinking” … and “favorable action”. The brain and spirit are really potent tools. Spell casting is merely a way to program these tools to help draw in desires and goals.
Any time you blend favorable thought, belief in yourself, and positive action, you’ll succeed in accomplishing what you seek. Spell casting is a fun and empowering way to produce this process inside of you. This 42-page ebook will explain much more about this and how you can begin casting your first spells.