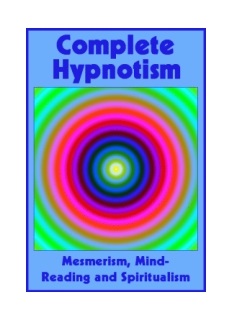 Mesmerism, Mind-Reading and Spiritualism … There is no doubt that hypnotism is a very old subject, though the name was not invented till 1850. The word hypnotism means sleep, and the definition of hypnotism implies artificially produced sleep. Sometimes this sleep is deep and lasting, and the patient is totally insensible; but the interesting phase of the condition is that in certain stages the patient is only partially asleep, while the other part of his brain is awake and very active.

It has been demonstrated again and again that persons can and do frequently hypnotize themselves. If a person will gaze steadily at a bright fire, or a glass of water, for instance, he can throw himself into a hypnotic trance exactly similar to the condition produced by a professional or trained hypnotist. Complete insensibility to pain may be induced by hypnotism, and it has been used as an anaesthetic.

It has been noticed that persons in the hypnotic state seem to have certain of their senses greatly heightened in power. They can remember, see and hear things that ordinary persons would be entirely ignorant of. There is abundant evidence that a supersensory perception is also developed, entirely beyond the most highly developed condition of the ordinary senses, such as being able to tell clearly what some other person is doing at a great distance. It is on power of supersensory, or extra-sensory perception that what is known as telepathy and clairvoyance are based.

Persons in the hypnotic condition have been able to tell what other persons were doing in distant parts of a city; could tell the pages of the books they might be reading and the numbers of all sorts of articles. Such facts as these have stimulated experiment in the direction of testing thought transference. These experiments have usually been in the reading of numbers and names, and a certain measure of success has resulted….